“Traveling” may be an offense in basketball, but the Bay Area Travel Writers still got some court time at the Golden State Warrior’s Chase Center during their 2020 annual meeting.

Situated across Mission Bay from Oracle Park, the latest addition to San Francisco’s sports scene is a pearl amidst steel-and-glass office buildings and still under-construction residential structures, collectively called Thrive City. With the $1.4 billion complex having just opened last September, the plastic wrap is hardly off the structure — but its 18,064 seats are already being put to good use. 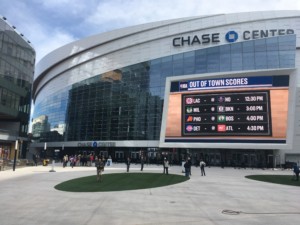 Members were greeted by Kim Stone, the center’s general manager and a veteran GM, with over 12 years overseeing the Miami Heat’s American Airlines Arena before taking the reigns of the ambitious development. Stone gave an overview of the brief but already extensive history of the center, beginning with its entirely sold-out reunion of Metallica and the San Francisco Symphony September 6th last year to the opening of Thrive City’s first restaurant this week, Dumpling Time.

Members were then invited on a tour of the center’s extensive lounges, VIP rooms and club levels — but first, a rare opportunity to experience the court up close and personal. With the Orlando Magic having cancelled their practice round that morning — either out of fatigue or, more likely, fear of the BATW’s well-established three-point record — members were free to to soak in views reserved typically for VIPs and players. 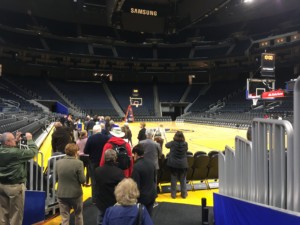 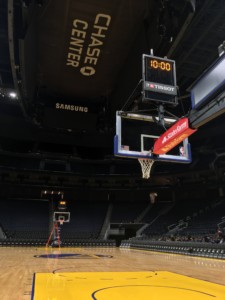 Though only nine months into her position as the Chase Center’s GM, Stone already walks the hallways with a practiced attention to detail; during the tour, a doorstop that didn’t quite stay is photographed on our tour and mentioned to maintenance via a quick text. A sports complex is a million details bundled together and Stone is attuned to all of them, sharing a unique rapport with the structure. 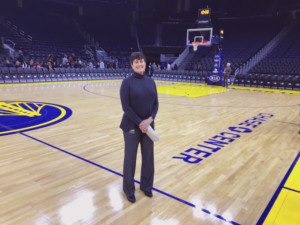 “There are definitely parts of the building I didn’t expect to be come so familiar with… the drain basins and pump rooms in particular. But who else ever gets to see those?” Stone laughs.

Far removed from pump rooms are the lux lounges tucked underneath and overhead the bleachers. Equipped with buffets, well-cushioned couches and cocktail sets, they differ from the nachos and super-heated cheese that went with most of this writer’s basketball games, but to each their own.

The Chase Center happily accommodates all tastes, however, including nachos. Ringing the arena and stately club rooms are food venues offering fans insight into the best of San Francisco street food, hot dogs and other basketball staples — plus more than a few places to enjoy a spiked improvement over your typical Coke. 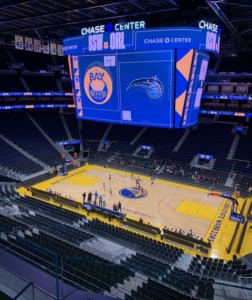 The arena is never daunting in its size. Built with sell-out crowds in mind  —and from Sir Elton John to Latin artist Bad Bunny, Chase Center has already seen many — the complex is nonetheless intimate. The roof rises only 90 feet from the court’s surface, which, alongside the massive jumbotron, makes for an arena that does not feel as vast as it really is. The resulting intensity during games and concerts is a constant selling point with attendees.

Chase Center is not a standalone building though it could be; set within Thrive City, the venue is intentionally a centerpiece of a broader community already featuring farmer’s markets and a smorgasbord of incoming restaurants. Alongside Dumpling Time, the breezy plazas will soon enjoy the smell of barley and yeast from Harmonic Brewing and sizzling steaks from Miller & Lux, a Tyler Florence Steak House. A dozen more eateries are setting up shop alongside the already open Golden Gate Warriors merchandise store, ready to outfit generations of Warriors fans to come. 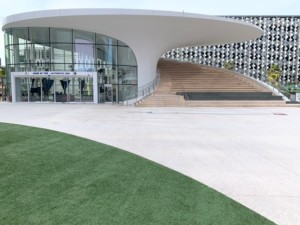 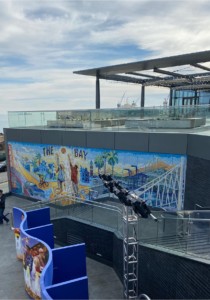 Though a venue for performing arts, the Chase Center is not without artwork; its East entrances feature a delightful mural and most notably, Icelandic artist Olafur Eliasson’s massive “Seeing Spheres” installation. These five boulder-sized orbs with well-polished mirrors facing inwards furnish a photo opportunity comparable with Chicago’s famous Bean — with less crowds for now.

We’d like extend special thanks to BATW’s Lina Broyodo for arranging our visit with Lisa Goodwin of the Chase Center — and to Kim Stone and Nadine Masarweh, a former student of executive director Ginny Prior! Who said teaching doesn’t have its perks?

Following an in-depth tour of the complex featuring nearly everywhere but the pump rooms, members retired for 2020’s annual meeting, the highlights of which are will be detailed in a separate post.