An Illuminating Day by the Bay

An Illuminating Day by the Bay

By Russ and Pat Johnson

Waterfront is more than a geographical designation. Think noir. Think Bogart. Think drunken sailors Shanghaied to a slow boat to…Shanghai. The San Francisco waterfront has suffered its share of noir. The best known dark moment was Bloody Thursday, July 5, 1934, when striking members of the International Longshoremen’s Association, under the leadership of Harry Bridges, were charged by mounted police who fired teargas and shotguns. Two men were killed and many injured. This, and the parade and general strike that followed, were credited with spurring the revitalization of America’s labor movement. Injured strikers were carried to the ILA’s union hall, which, since 2017, has been headquarters for San Francisco’s Commonwealth Club, the host of BATW’s November meeting.

BATW members received a fascinating dual education: the history of the San Francisco waterfront and one of the city’s most honored institutions. 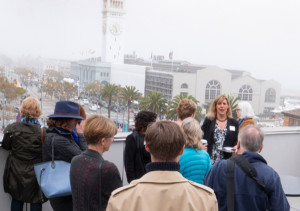 The Commonwealth Club was founded in 1903 as a non-partisan forum for “discussing problems and their solutions”. It has featured thousands of speakers, from presidents to Pulitzer Prize winners, since Theodore Roosevelt addressed the body in 1911. Now there are now about 400 speakers per year. Its membership and events are open to the public.

We were first addressed by Kristina Nemeth, the club’s travel director, who gave us a tour of the ultra-modern, LEED Gold certified facility built on the bones of the old union hall. While the facade facing the Embarcadero is glass and steel, the rear, facing Steuart Street, retains its historic architecture and brickwork.

She talked about the Commonwealth Club being a forum for “civilized discussion”, stressing “engagement” without loud voices or protests.

That philosophy carries over, she said, to their affinity travel program, which brings people together with common interests. She called the club’s efforts “friend raising” The Commonwealth Club offers educational tours ranging from the American South, aimed at developing an understanding of the Civil Rights Movement, to Israel to explore Jewish, Palestinian, Christian and Druze cultures and sacred sites, all without political or religious slant. The groups are led by experts and educators. She said the Club holds reunions of fellow travelers who share its philosophy.

For the second part of the meeting, we met architectural historian Rick Evans, who offered a tour of San Francisco’s waterfront. He began by holding up a map showing that today’s waterfront was mostly bay water at the time of the Gold Rush. Ships delivering miners and supplies docked at its edge and were often abandoned. San Francisco’s waterfront was extended into the bay on a foundation of landfill and the bones of dead ships, some of which still turn up in excavations. The waterfront went from riches, during the Gold Rush era, to a seedy port and industrial district, sliced in two in 1959 by the ragged-edged knife of the Embarcadero Freeway, and returned to riches after San Francisco’s “freeway to nowhere” was torn down following the 1989 earthquake. The waterfront came out of the shadows. Now, some would suggest, it has gone beyond mere riches. 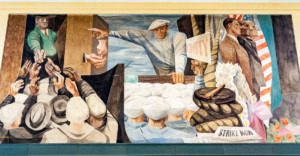 We really had to use our imaginations to see what this waterfront once looked like. We gazed up at the new Facebook headquarters and architect Jeanne Gang’s twisty skyscraper, all under stratospheric eyes of the Salesforce Tower, which now commands the San Francisco skyline, and the teetering Millennium Tower. The mail sorting room of the old Rincon post office is now an open courtyard surrounded by steel and glass office buildings and apartments. Look closely, however, and there is still much history to be seen here. The lobby of the old post office is ringed by a 27 WPA murals depicting California and San Francisco’s past from the original Native Americans, to Spanish explorer Juan Rodríguez Cabrillo displaying his blood-tipped sword, to longshoreman Harry Bridges firing up his workers’ rebellion. 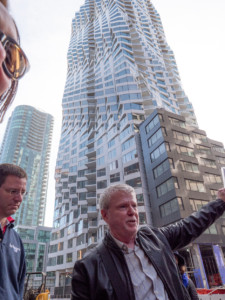 Back on the Embarcadero, Evans told us the story of the the Audiffred Building. Just in front of it, police fired their shots into the crowd on Bloody Thursday. It is the oldest surviving building on the waterfront because, as Evans tells us, the bar on its main floor was a favorite of firemen, who saved it from being bulldozed into a firebreak following the 1906 earthquake after a bartender bribed them with two quarts of whiskey apiece and a fire cart full of bottles of wine. Now, that’s a real San Francisco story. 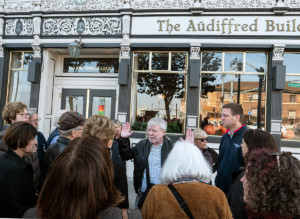 Evans and the Commonwealth Club also offer neighborhood adventures in “the back alleys” of Chinatown, Nob Hill, and the steep slopes of Russian Hill, which he calls his cardio tour. The tours are available to members and non-members and can be found in the events section of commonwealthclub.org