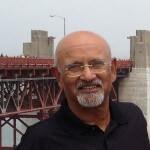 BATW is pleased to welcome Ashok Khanna as a new Provisional member:

Ashok Khanna was a Development Economics Consultant who provided analysis and advice on industrial, trade and finance policies that promote private sector development to countries that are clients of the World Bank. In his 25 plus years association with the World Bank on staff and as a consultant, he worked on several countries in Asia, including India and China, and some countries in Eastern Europe, Africa and the Middle East. Dr. Khanna holds a B.Sc (Econ) from London University (London School of Economics) and an MBA and PhD from Stanford University. He is also a Chartered Accountant (UK).

Ashok has written extensively on economic policy and emerging markets and, more recently, travelogues. He became fascinated by other places and cultures at a young age leafing through geography books. He got his first chance to travel out of India when he was 17 and has not stopped since. As a student in the UK, he explored Europe, from Norway to the North to Spain to the South, to Greece to the East and most of the countries in between. Since 1985, when he began to work with the World Bank, his travels took him to several other continents. In 2010, he started to write travelogues and recently also began reviewing restaurants. These articles are posted on his website www.ashokkhanna.net; his restaurant reviews are also on www.bestofbayarea.com.