“Breakfast at Boudin Bakery and Cafe” – by Robert W. Bone

“Breakfast at Boudin Bakery and Cafe” – by Robert W. Bone 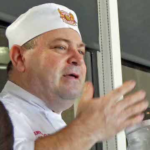 “Breakfast with the ‘Mother Dough’ at Boudin Bakery and Cafe”

A unexpected sunny and warm day greeted about 30 members of the Bay Area Travel Writers on February 17, when the monthly meeting was held at the Boudin Bakery and Cafe in San Francisco.

An equally pleasant surprise was the excellent bacon-and-eggs meal laid on in the historic establishment for members who were expecting only a modest “continental” breakfast.

The bakery is often said to be the oldest ongoing company of any kind in San Francisco. And the Boudin name is said to have been synonymous with sourdough bread in California since the days of the Gold Rush. It has been headquartered at Fisherman’s Wharf for well over a century.

The gathering took place in Boudin’s new second-floor museum bearing signage and exhibits that outline its long history and exclusive manufacturing process. Also featured are some special glass windows giving visitors a wide birds-eye view of the detailed sourdough manufacturing process on the ground floor below.

The morning’s program consisted of an animated and entertaining talk by Fernando Padilla, Boudin’s genial “master baker” for the past 38 years. Detailed questions by the membership were deftly answered by this irrepressible expert, who conducted his talk while simultaneously holding a jar of the special “mother dough.” Padilla said each batch still holds a small amount of the century-old starter material.

“We do not use any chemicals,” Padilla said, adding that there were no commercial yeasts of any kind either. Just the “symbiotic colony,” which he held in his hand.

“The mother dough lives only here,” he said.

At the conclusion of the program, each member received a large baguette loaf of Boudin’s sourdough bread to enjoy at home.

Thanks go to Molly Blaisdell, who arranged this fun and informative event.