Georgia Hesse: A Legend in Her Own Time 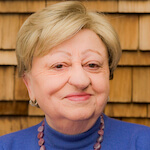 The year was 1980. I was an unknown, fledgling freelance travel writer at the time, and Georgia was the legendary founding Travel Editor of the San Francisco Examiner, the grande dame who presided over the paper’s thick, award-winning Sunday Travel Section.

I had recently moved to the Bay Area and, like dozens of writers, had submitted an article on speculation to the Examiner Travel Section. When I hadn’t heard from the section after a few months, I plucked up my courage, picked up the phone, and dialed the Travel Section number.

I was expecting a receptionist or editorial assistant to answer. So I was completely unprepared when the phone was picked up and a distinguished voice said, “Georgia Hesse.”

That’s when I almost fainted.

I managed to recover enough to stutter, “H-h-hello, Ms. Hesse. You-you-you don’t know me, but my name is Don George and I sent you a story on Kyushu in Japan and I’m just wondering what the status of the story is.”

I’ll never forget her response. “I don’t know anything about your story,” she said, “but I’ve just been talking with someone about you, and I’d like to meet you. Can you come to the Examiner?”

That was the second time I almost fainted.

As it turned out, Georgia was good friends with a writer I had just met on a press trip to Japan. Georgia was planning to take a one-year leave of absence from the paper, and half an hour earlier, she had called that friend to see if she might be interested in taking Georgia’s place for the year.

“I can’t, I’m too busy,” the friend had apparently replied, “but I just met a nice young man who recently moved to the Bay Area, and he might be perfect for the job.”

Incredibly enough, that was how I ended up working at the San Francisco Examiner, first as a Travel Writer and eventually as Travel Editor.

So it is no exaggeration when I say that Georgia Hesse changed my life.

At my first in-person meeting with Georgia, I was enchanted, and happily, she liked me, too. She arranged for me to meet with the publisher and then with the editor and the managing editor, and with her enthusiastic support, I was hired to replace her while she traveled and wrote on her one-year leave.

As soon as I was hired, Georgia took me under her wing – the best wing imaginable for a fledgling travel writer-editor.

My first impression was that Georgia seemed to know just about everything, and whenever she didn’t know something, she knew where to go to learn it – an essential art in those pre-Internet days. She was wonderfully worldly, having studied in France as a college student and then having traveled around the globe for two decades as the paper’s travel editor.

Over time, I came to know her and her work better, and realized just how exceptional she was as a writer. She had a special talent for bringing places, people, and experiences to life with an alchemical mix of erudition, humor, compassion, and eloquence, and a wizardly way of layering her stories with historical and cultural lessons without a trace of pedantry.

Not all great writers are great editors, or vice-versa, but Georgia was also an extraordinarily incisive editor, who brought two essential but rarely combined skills to her work: She was adept at the big-picture organizing of a nationally important Sunday section, that sought to cover the entire world geographically and thematically each week; and she was skilled in the art of story-editing, both refining the larger structure of a piece and fine-tuning sentence by sentence and word by word.

Finally, she was an exemplary ambassador for the newspaper and for the fields of travel writing and publishing.  She moved through the world with the same high intelligence, integrity, and humor that graced her writing, and she was universally respected and admired. When Georgia walked into a room at any travel-related gathering, every head would turn and you could hear the whispers, “That’s Georgia Hesse!”

Back in those halcyon days of the late 1970s and early 1980s, San Francisco was still one of the dominant outposts in the United States for foreign tourism representatives. There were two dozen national government tourism offices in the city at that time, and every December, they would sponsor a glittering celebration in a grandly decorated hotel ballroom, with a sumptuous, multi-course feast. All of the tourism officials would be there, as well as all of the major Northern California travel writers and editors, both staff and freelance.

At the beginning of that feast, every year, Georgia would rise from her seat at one end of the ballroom and walk with a slow, queenly dignity past all the festive tables to a podium at the other end of the room. There she would take the stage, and bless the gathering with a few choice words that perfectly expressed the essence of the year, the bonhomie of the occasion, and the good fortune that we all had to be members of the best industry in the world, in the best city on the planet.

At the end of her one-year leave, we all expected Georgia to resume her position at the paper — but as it turned out, she was having too much fun to return. Instead, she decided to devote her days to traveling, writing, and living well, as she has continued to do ever since.

As for me, I ended up working at the Examiner for 15 years, then moved on to other publications and roles, but remarkably, I was able to build my entire professional career on the foundation of that one year working as a writer and editor in Georgia’s stead.

Looking back to that time now, I feel lucky beyond words to have had Georgia as my mentor. When I took her place, the Examiner Travel Section was considered one of the very top travel sections in the country, and she was a legend among her fellow editors and among her readers, who were devoted to her Sunday columns and tales.  She was beloved for bringing the world into Northern California homes every weekend with stories – her own and others – that infused travels near and far with an engaging, inspiring sense of wonder and fun.

Georgia did her best to teach me, by word and by example, how to edit a complex and conspicuous Sunday section, how to treat fellow writers and editors graciously, how to honor readers, and how to construct the intricate weekly puzzle of a world-covering publication for a sophisticated and passionate audience.

What a role model! Georgia was — and still is — the consummate travel writer and editor, the exemplar of a kind that’s increasingly hard to find, who works hard and plays hard and loves with an equal passion both the world and the word.

Looking back over the spectacular span of her career, I realize that I have learned more from her, and am more grateful to her, than I can ever adequately express.

And I realize too how profoundly her writing and her editing have enriched all of our days and have made us all better, deeper human beings.

Thinking of all this, I picture her now in my mind. She is sitting regally at the end of an enormous, festively decorated ballroom. That room is filled with all of her fans, writers and readers and industry leaders. Georgia surveys the room and smiles, and a hush falls over the scene. Then all as one, we rise, turn her way, and lift our glasses of Champagne. And speaking for us all, I look at her and say: “This is for you, dear Georgia. You are truly one of a kind, and we all feel blessed beyond measure to have you in our lives.”