“Art Above the Bay” – by Georgia I. Hesse

“Art Above the Bay” – by Georgia I. Hesse 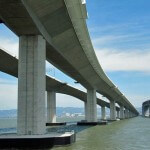 “Art Above the Bay”

by Georgia I. Hesse

When San Franciscans behold their bridges, crossing them and admiring them, we are prone to think them marvels of engineering: The Golden Gate spans 4,200 feet or four-fifths of a mile between the towers, for example, three times the length of the Brooklyn Bridge and 700 feet longer than the graceful George Washington. The original Bay Bridge, including the structure itself and its approaches, measures 8.4 miles and the tunnel boring through Yerba Buena Island ranks largest of its kind on Earth.

Yet when architect Donald MacDonald contemplates and converses about these soarers, he speaks almost poetically, convincing his listeners to consider them artworks. From the Renaissance, he summons the “rule of thirds,” for example, and “catenary curves” and from the 19th-century, that familiar concept of  “the golden mean.” He calls attention to the “intensely art deco tunnel arch…integrated into the island’s hillside.”

San Franciscans know (as does much of the wider world), that the rebuilding and redesigning of the Bay Bridge were necessitated by the mighty Loma Prieta earthquake of Oct. 17, 1989, that shook the structure as if it were a trifle rather than a Titan. In the late ’90s, members of the Engineering and Design Advisory Panel still were debating, with MacDonald arguing for a self-anchored suspension span. He won. “With its distinctive single tower 525 feet high, its convex shape, opposite to the concave form of the main cables, relates the silhouette of the bridge to the shape of the East Bay Hills, beyond.”

This last point was illustrated, as were others throughout the talk, by photos of MacDonald’s own design drawings.

Sunlight and shadows, sense of mass, and the main span tower modeled on the Saturn V rocket (a “21st-century American metaphor”): Despite its chaos of construction concerns, this Bay Bridge may well become a symbol of Bay Area sophistication. Already the Golden State Warriors basketball team is employing its images on uniforms.

Nota bene: Donald MacDonald and Ira Nadel are responsible for the illustrations and text of three publications by Chronicle Books: Golden Gate Bridge (2008), Alcatraz (2012), and Bay Bridge (2013). I recommend them.

Oh, yes: BATW did a little business at its June meeting, for which Mort Beebe and Bill Scull deserve kudos. It was held at Mort’s condominium complex, 150 Lombard St., and called to order by Karen Misuraca in the absence of President Ginny Pryor. Bill described briefly his six-month stint, now underway in Accra, Ghana, with SEED, a new Stanford University institute. His position as treasurer on the Board will be assumed for the interim by longtime, very experienced member Janet Wilson.

It was a great meeting, all agreed, and six of us saluted it at a most informal lunch under the tent at Pier 23.