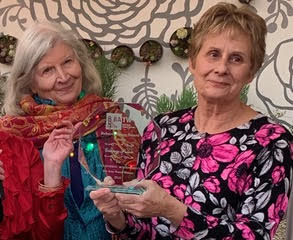 This year’s BATW Rebecca Bruns Memorial Award goes to Ginny Prior. The award honors her achievements and thanks Ginny for all she has contributed to BATW.

BATW member Molly Blaisdell presented the award to Ginny who, like Rebecca, is committed to travel writing and giving back to our community.

There is not enough time today to list all of Ginny’s accomplishments…she’s a woman with seemingly limitless energy.

Her career began in radio and TV news. You might recall hearing her on KSFO radio, the Bay Area’s number one rated morning show in the ‘80s.  She’s been a CBS radio correspondent and a writer for USA Today and AAA magazines. East Bay readers look forward to the Town Crier, Ginny’s popular weekly column in the Montclarion, and her monthly travel column that appears in the Hills Newspapers (total print circulation 93,000) and online in the East Bay Times.

As a Professor of Journalism, she guides and inspires her students at St. Mary’s College of California.

And her 15-minute adventure travel “Ginettes” can be heard on Out and About (http://sportsbyline.com/out-and-about/) on the Sports Byline USA radio network.

As many of you know, Ginny was past President of BATW (co-President 2011, President 2012-2014). What you might not know is that she is also an avid swimmer and a fine musician who writes and sings country songs. We learned of her musical prowess at the BATW holiday party when Ginny belted out a song, upon learning she was the 2018 recipient of the Rebecca Bruns award! (See Ginny’s performance here.)

The Rebecca Bruns Award is presented, usually on a bi-annual basis, to a BATW member who embodies the spirit of Rebecca Bruns, one of the organization’s founding members and a gifted writer, who died in 1994 at the age of 44.

In 2012, Rebecca’s now 99-year-old mother donated funds for a cash award to accompany the lovely glass plaque. Our very own Grande Dame, Georgia Hesse, was the first to receive both the $200 cash stipend and the plaque that same year. Morton Beebe was honored with both in 2014.

And now our 2018 honoree Ginny Prior is the 3rd member to receive both the cash award and the glass plaque with our updated BATW logo.