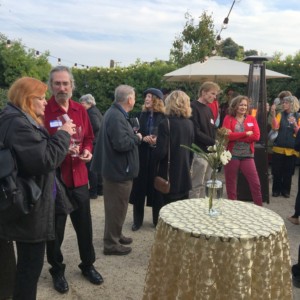 It was a holly jolly group of nearly 70 members and guests who gathered for the annual BATW Holiday Party December 9 at Aracely Café on Treasure Island in San Francisco Bay.

The highlight of the afternoon was the presentation of the Rebecca Bruns Memorial Award to long-time member and past president Ginny Prior. The award of a special plaque and a $200 check is given biannually in honor of the late Rebecca Bruns (see article here).

Ginny made her acceptance memorable by singing one of her favorite country & western songs, at the urging of presenters Molly Blaisdell, Ruth Carlson, Lee Daley and Carol Canter, and to the delight of the applauding crowd. 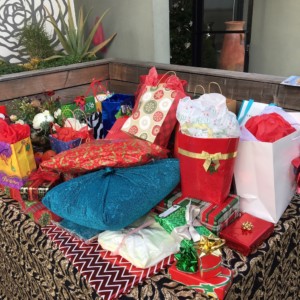 The party concluded with a drawing for several prizes, including two bottles of Treasure Island-made wine, won by Bob Bone and Marc Longwood; a bottle of Gold Bar Whisky from the Treasure Island distillery, won by Molly Blaisdell; a copy of the San Francisco: City by the Bay photo book by acclaimed photographer Morton Beebe that went to photographer Charles Pannell; and a dinner for two at Aracely, won by BATW President Judith Horstman.

Elliot Gillespie of the new Gold Bar Whiskey distillery (set to open on the island in February) arranged for a small bottle of the spirits as a gift for each departing guest. The wines were donated and poured by Treasure Island Wines owner and vintner Jim Mirowski, Carole Martinson of Kohler & Frohling wines, and Umbriaso winemaker Dennis Hayes.

Many many thanks to all who made the event a success, especially the wonderful Treasure Island businesses: Linda Edson, owner of Aracely Café, which provided the venue and appetizers; Jim, Carole and Dennis who provided the excellent wines and Elliot of Gold Bar Whiskey; and the Treasure Island Museum.

The party was preceded by an open house at the Treasure Island Museum, one of the facilities being renovated and a valuable repository for history. The open house was made possible by BATW member Mort Beebe, who also sits on the TIM Board, and attended by about 20 BATW party-goers.

Treasure Island is an under-appreciated gem: more than 200,000 pass over it every day, with only a much smaller number stopping. But that’s about to change. It’s undergoing a major restoration and new development of housing and businesses., and BATW is pleased to be among the growing groups to celebrate the new island and its businesses.