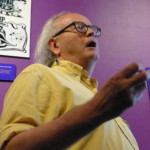 BATW members attending the June meeting found themselves reliving the Summer of Love, or at least a portion of it, in a program at the GLBT History Museum in the Castro district of San Francisco.

The program featured talks by two prominent Castro residents: Gerard Koskovich, the museum founder, and Joey Cain, the curator of a special exhibit entitled “Lavender-Tinted Glasses; A Groovy Gay Look at the Summer of Love.”

Koskovich is a noted historian and rare book dealer. A founding member of the GLBT Historical Society, he was also one of the historians advising the National Park Service on the launch of the LGBTQ Heritage Initiative.

“Our culture is not taught in schools,” he said, continuing to underscore the need to keep gay history alive among a younger generation.

“Lots of people still think the gay culture is new — like cell phones!” he said.

Joey Cain then took the group piece by piece over a special wall exhibit he curated based on gay participation 50 years ago in the Summer of Love.

“In 1967, young people were seeking a way out of what they saw as the soul-destroying alienation of materialism,” he said. “They created new art, philosophies, politics, music and relationships.”

The Lavender Tinted Glasses exhibit will continue through September 17 at the museum.

Thanks to former Executive Director Jim Gebbie, who arranged this fun and informative program.