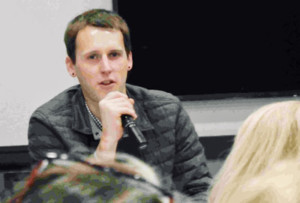 “Travel Editor Says Keep It Local and Keep It Relevant”

The Travel Section of the San Francisco Chronicle is no longer publishing articles on foreign travel, and is not much interested in the other 49 states either, members of the Bay Area Travel Writers learned recently.

Greg Thomas, travel editor of the newspaper, spoke to an audience of 33 attending the BATW monthly meeting. It was held February 16 at the atmospheric old Spero Hotel in downtown San Francisco.

With this news, the 150-year-old local publication has followed the trend of many U.S. newspapers in the Internet age now that print advertisers are reluctant to support feature material based outside their circulation areas.

“The Chronicle’s travel section has turned a corner,” said Thomas, putting a positive spin on a subject of interest to many members who traditionally look forward to more far-flung experiences to write about.

The section will continue to entertain freelance contributions on assignment, he added. Pitches from freelancers should be made to him by email at gthomas@sfchronicle.com.

“The goal is to inspire Bay Area readers to explore the state conscientiously and help them plan weekend getaways,” he said.

“We want to be required reading for anyone who wants to be kept informed of the issues and forces shaping the way we experience our state,” said Thomas.

He declined to be specific on the amount of freelance payments, saying they would vary depending on several factors, such as the degree of the writer’s expertise and knowledge, and less on editorial excellence.

“We don’t publish an editorial calendar,” Thomas said, advising writers to “pitch a story, and if it goes well you will get on the list of preferred writers.”

“Tell me what the story is and then I’ll assign it,” he said.

“Remember, we want timeliness,” he said. “Things like ‘why anyone cares.’ And we are not afraid of first-person stories.”

“However, we want stories about the subject — not so much about the writer,” he cautioned.

During the program, BATW members enjoyed an especially savory breakfast prepared for the group by the Spero Hotel. A hotel representative said the establishment was once called a “temperance hotel,” and was known since 1926 “for the flavor of our beers.”