An Evening with the Giants: Baseball San Francisco Style 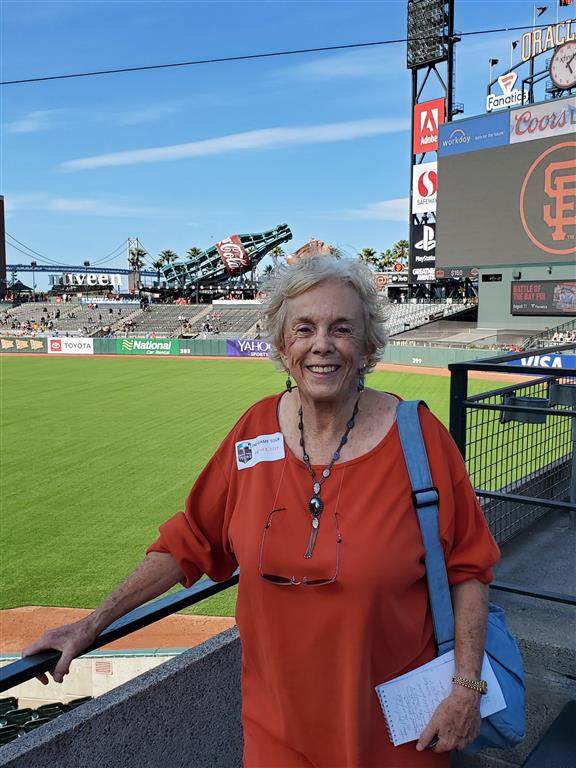 By Diane LeBow
“There have been only two geniuses in the world, Willie Mays and Willie Shakespeare.
─Tallulah Bankhead (poster in Giants’ “Vault” historical museum)

It was my first time─attending a Major League Baseball game!
I have traveled the world, cheered at village soccer games in the rain forests of Honduras, the Naadam games in Mongolia, but here I was, a girl from New Jersey, at her first Major League Baseball game in San Francisco’s state-of-the-art Oracle Park.
Oracle, one of only two ballparks in the country with waterfront locations, is spectacular, overlooking our gorgeous bay. As we took our seats on a sunny San Francisco late afternoon, flags snapped in the wind, small planes buzzed overhead, and just offshore in McCovey Cove, sailors in kayaks and yachts waited, hoping to bag a stray ball. Every detail of the Park’s construction is state of the art, including, very importantly, a design to block the cold winds that used to freeze fans in the old Candlestick Park.
My adventure had begun at a Bay Area Travel Writers’ event that was hosted by Laurie Armstrong, Sr. Director for SF Travel, in their spectacular offices overlooking San Francisco. (https://www.sftravel.com) At a raffle sponsored by Bay Area travel partners, I won two tickets to a home game for our own heroic Giants arranged by the Giants’ Marketing Coordinator, Ben Feder. (bfeder@eiantsenterprises.com) Ben was very enthusiastic about me attending a game and helpful with advice when I admitted being a total neophyte. We decided on the first game of a series against the Philadelphia Phillies, an evening game, and I invited Jim Martin, good friend and an eager mentor for my first big game experience. Ben generously offered us two tickets for pregame ball park tours and provided excellent seats
On the pregame tour, our guide Bill Silver, one of 24 tour guides, showed us historical items regarding the Giants’ move from Brooklyn, their World Series trophies and enormous gold and diamond rings (worth $25,000-$40,000 each), and even ecological info. that the park recycles 95% of its waste. The newly opened Giants’ Vault documents the team’s history, starting back in 1883. One display proudly proclaims: “By winning the first National League pennant in 27 years, the 1989 Giants ignited the championship flame in San Francisco that glows to this day.”
Guide Bill told our small group about several very interesting aspects of Oracle, of special note to me, that educational tours are scheduled regularly for school children, incorporating geometry, history, and geography lessons during the visit of these budding young baseball fans. For more information, contact: educationaltours@oracle.com.
After watching warm ups from behind home plate as part of the tour,  the game began with popular starting pitcher, Madison Bumgarner, tossing the ball with one of his famous fast ones. The enthusiasm of the crowd was contagious. I was impressed with how much pleasure this cross section of America exhibited at the game, all in good cheer with kindness and consideration for others. New for me was when the occasional foul ball reached a section of the grandstand, folks cheered with the lucky catcher displaying his prize. One of them sailed right over our heads, a bit too far to grab it.
Of course, we all enjoyed the delicious variety of foods. No longer just ball park franks, although they were represented of course, but I especially enjoyed the Dungeness crab sandwiches on sour dough─SF at the ballpark─ and soft ice cream.
Perhaps we brought luck to our team as the Giants broke a four game losing streak, won this game 5/0 and the subsequent 4 game series as well. As we left the stadium, I recalled Jacques Barzun’s lines displayed in the Vault: “Whoever wants to know the heart and mind of America had better learn baseball.”
Yes, I’m hooked. I’ll be back and maybe even catch a foul ball next time.