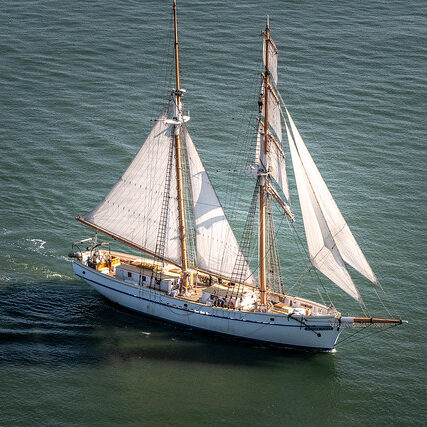 Our group will meet in front of the Bay Model Visitors’ Center, 2100 Bridgeway, in Sausalito.

The Matthew Turner is 132 feet long, has two masts and 11 sails, and is built from Douglas Fir and Oregon White Oak, with brass fittings. Its day-job: It hosts middle-school kids from around the Bay Area, getting many who’ve never been on the water out there.

The ship is modeled on one built in the Bay Area in the late 19th century, The Galilee, and named for that ship’s builder, the Talented Mr. Turner. Back in the day, way back in the day, that ship set the record for a trip from San Francisco to Tahiti, making the voyage in a mere 19 days. It ultimately retired, and sat for years at the foot of Napa Street in Sausalito, its stern displayed at Fort Mason.

We will meet Alan Olson, who, in 1985, co-founded the non-profit hosting us, The Call of the Sea. He has heard that call his whole life. As a young man, he built a 40-foot catamaran and sailed it from Minneapolis down the Mississippi to the Gulf of Mexico. He then helped construct the 70-foot brigantine, the Stone Witch, which became a Greenpeace flagship. For years, it sailed along the California coast, serving as a sailing classroom. After a five-year retreat to a Buddhist monastery in Northern California, Olson began to think about, to dream about another tall ship. The Matthew Turner was the eventual result.

As we’ll hear, the project involved leading maritime architects, funders both large and small and a whole slew of local volunteers. It was built over the course of seven years, at an estimated cost of $6-million. More info: https://callofthesea.org

We will be just under half of the ship’s passengers that evening – they have reserved 23 spots for us. This is a members’ only event. We have to give a list of names to the org for the manifest two weeks before the sail. As the old come-ons used to say, reserve early to avoid disappointment.