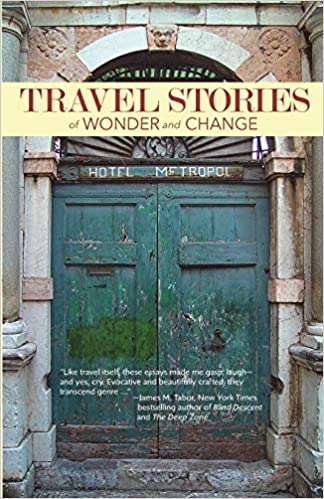 There is an unintended wistfulness about the travel stories in this collection. They were submitted just as the coronavirus pandemic surged, bringing global travel to a standstill.

We could not have imagined when we conceived this book in January 2020 that a virus would change so much, and so quickly; that soon millions would be grounded, borders closed, events cancelled, and whole cities held hostage as the death toll rose and global economies faltered.

But our members’ memories of travel adventures endure. This book celebrates them, captured in stories from five continents and more than a few islands, on land and at sea. And “stories” they properly are, about journeys to wild places in Canada, China and California; boat trips in the South Pacific, the South Atlantic and the upper Amazon River; and a visit to vineyards springing up in the unlikely vacant lots of downtown Detroit.

Tellingly, as we were locked in isolation, the majority of travel stories submitted feature encounters with the people we met around the globe. Among them: a walk with a child down a dusty road in Madagascar, a bus ride with locals in the Philippines, a negotiation for jewelry in Tibet, and the purchase (reluctantly) of a rug in Turkey. Writers recalled a New Year’s Eve party in Egypt, a rescue in a Moroccan bazaar, and the kindness of strangers in Ireland, Italy, and more.

In a time when travel was frozen, these stories remind us that the greatest gift of travel is not the scenery, spectacular though that may be: It’s the understanding and appreciation of “other” that it fosters. As the well-traveled Mark Twain wrote: “Travel is fatal to prejudice, bigotry, and narrow-mindedness, and many of our people ne ed it sorely on these accounts.” May we have it again, soon.

As we launch this book into the world, the global pandemic situation is still grim. It may take a long time—if ever—before travel becomes once again an open and easy way to explore our planet. But we professionals are optimistic about the future of travel, whatever it will be. We have to be, as we are driven to explore. As Jules Older writes in his essay, “Goers and Stayers,” those two tribes are as different as day and night. We are the “goers.”

“Oh, the places we’ll go! There is fun to be done! . . . And when things start to happen, don’t worry, don’t stew. Just go right along, you’ll start happening too!”

Thanks, honors and acknowledgments

This book would not have been possible without the generous contributions of so many.

First of all, we thank Jim Shubin and Laurie McCandish King, partners in life and work, and honor them with the biannual Rebecca Bruns Award for outstanding contributions to the BATW. Professional book designers and producers, they produced all six of BATW’s anthologies, as volunteers. They also contributed to this latest book: The cover photo is by Jim, and Laurie’s essay, “Speaking Malagasy,” appears in the book Congratulations! See separate article for more about them and the award.

Special thanks are due to BATW’s own Georgia Hesse, who didn’t let a broken hip deter her from choosing a winner and two honorable mentions for the newly created Georgia Hesse Prize. They are Laura Deutsch for “Rhythms of Arezzo,” with Honorable Mentions for April Orcutt’s “Tibetan Bargain with a Twist,” and Anne Sigmon’s “Sierra Point.”

Thanks to Georgia’s fellow renowned travel journalist, Don George, who offered an appreciation of Georgia and her work; and to Catharine Hamm, who contributed a thoughtful prologue about the future of travel journalists. She also helped choose the finalists for the Georgia Hesse Prize.

The many entries were juried by a panel of 12 independent and distinguished judges with too many awards and accomplishments to list in detail: Our apologies! Please see the acknowledgments in our book for more. They include in alphabetical order: Sivani Babu, co-CEO and Creative Director of the exploration-driven magazine Hidden Compass; Karen Benke, a Bay Area author and writing guide who directs Creative Writing Adventures, a nonprofit program, of Cal-Poets; Nancy Day, a widely-published journalist, editor, Nieman Fellow and former journalism professor; Don George,  former travel editor of the San Francisco Examiner/Chronical and Salon.com, author of many books and articles and chair of the Book Passage Travel Writers and Photographers Conference; Don Gibbons, who was editor-in-chief of Medical World News and a director of commutations at Stanford and Harvard and for the Californian Institute for Regenerative Medicine; John Greenman, former editor and publisher at Knight Ridder where he led a team that won the Pulitzer Prize, author of a book on travel journalism and a Distinguished Professor of Journalism at the University of Georgia’s Grady College; Jeff Greenwald, founder of Ethical Traveler, podcast producer and the author of several best-selling books; Catharine Hamm, long-time travel writer and editor, most recently of the Los Angeles Times, the president of the SATW Foundation and winner of many travel writing awards; Paul Lasley and Elizabeth Harryman, who produce and host two daily radio shows broadcast to millions which have won many awards; Christine Loomis, a  widely-published writer, first travel editor at Parents magazine and recipient of several awards; and Josephine Matyas, widely published in travel and more, including history, culture and the great outdoors.

Lastly, many thanks to the book committee and other volunteers who put many hours  planning and editing. Committee Chair Alec Scott, who did the heavy lifting and was involved in every step of this book’s production from idea to reality, was gifted with a bottle of French champagne Thursday in recognition of his labor and his leadership. Others working on the book include Bob Cooper, Jim Gebbie, Judith Horstman, Karen Misuraca and Amy Sherman, with support from executive director Ginny Prior.

We are as always grateful to Book Passage for its support: they are not just a renowned independent bookstore – they are a valued community partner, supporting and promoting local writers and artisans. We can’t wait to get back again to in-person events on their premises! Thank you for all you do for travel writing!