Laurie McAndish King won awards for four of her stories in this year’s Travelers’ Tales’ 14th annual Solas Awards. The competition was tough this year, with some 200 entries.
Here are her winning stories:
Those three stories all appear in Your Crocodile Has Arrived: More true stories from a curious traveler.
Also, the story “Eat, Pray, Scrub,” which appears in Lost, Kidnapped, Eaten Alive: True stories from a curious traveler, won an honorable mention.

Meanwhile, BATW President Emeritus, Diane LeBow has won Solas Awards for two of her stories;
A silver award in the Women’s Travel category for “Women in Morocco: Up against the wall but laughing together” and
a bronze award in Doing Good or the Kindness of Strangers category for “An Unexpected New Year’s in Luxor“. 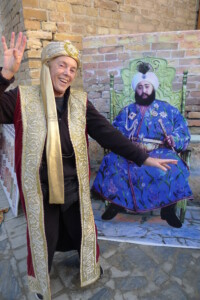 Diane dancing for an ancient Raj.

LeBow believes these are her 10th and 11th Solas Awards and wants to say thank you to Larry Habegger and Travelers’ Tales Publications for supporting the writing community. Congratulations, too, to fellow Solas award winner MJ Pramik.