When I need an ego boost, I just go to a BATW meeting! So many members have asked me how I was successful promoting my book, Secret San Francisco: a guide to the weird, wonderful, and obscure, that Ginny Prior convinced me to write this article.

Before becoming a travel writer, I worked in TV and radio news and then public relations which helped me understand what editors need… turns out it’s very similar to pitching travel stories.

Here’s what I learned about marketing my first book. 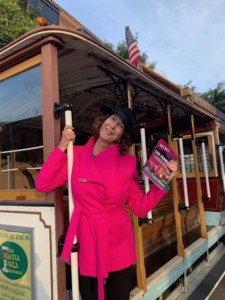 After You Write a Book

Your book is done! Congratulations, now you can relax. Hold on-don’t pop that champagne cork just yet, turns out your work has just begun. Now you have to market your book. Whether you self-publish or work with a publisher, you’re in charge of promoting your book.

When I approached Reedy Press about writing Secret San Francisco: a guide to the weird, wonderful, and obscure they asked me to write a sample entry and then a marketing plan. Reedy has a social media expert, an events person, and a public relations staff that sends out news releases, but they’re located in St. Louis so they’re unfamiliar with Bay Area media and really act as consultants. The author is responsible for using social media, events, and TV and radio shows to increase sales.  Much of my success was due to the friends I made in BATW as you’ll see below.

Most organizations need speakers and most of them don’t pay but allow authors to sell books.  I contacted the Commonwealth Club and my talk sold out quickly-must have been the word “weird” that got their attention. I panicked about speaking for an hour to 150 people (later I found out I could have done a question and answer session!) so I asked some of the characters in my book, Emperor Norton and the founder of the Gregangelo Museum to share the stage.  I didn’t sell many books-probably because the audience had to pay for the event-but the talk was broadcast on an NPR station.

Women’s groups are known for buying books and I was successful with Le Donne d’Italia, an Italian American women’s group, and the Metropolitan Women’s Club. I’m not a technical person and find power points boring so instead I had the women’s groups play a trivia game about SF and the winner got a copy of my book.

Reedy has a Facebook page where authors share tips, and some have created a bingo game to engage audiences. Other authors have done meetups to promote their book and conducted tours.

The only book signing I’ve done was at an art gallery! South End Rowing Club (SERC) asked members to participate in an art exhibit and included me. Now SERC’s sister club, the Dolphins have asked me to speak.

I also visited independent bookstores carrying Secret San Francisco: a guide to the weird, wonderful and obscure to sign copies.

The best way to sell books is what Lee Foster and Thomas Wilmer did…convince someone to buy large amounts of books…a hotel in Wilmer’s case and a tourist store for Foster.

Facebook, Instagram, Twitter and Linked-in became key to promoting my speaking engagements and posting tidbits from the book. I hash tagged everything Secret San Francisco and referred people to my book’s Amazon page. Endorsements are very important on Amazon so don’t be shy about asking your friends to recommend the book.

While researching my book I became active on Facebook sites for San Francisco history, so it was natural to promote my book to this audience and I learned locals were as intrigued by Secret San Francisco as tourists.

It was easy for me to create a Facebook page but organizing a website was more complex and I ran out of time.  I plan to do this for my next book: Oldest San Francisco.

I reached out to fellow travel writers who have a large online audience and Johnny Jet named Secret San Francisco: a guide to the weird, wonderful and obscure his travel book of the week.

When I noticed another travel, writer was profiled on SF Travel I contacted Laurie Armstrong. My interview got 1,000 hits so now the site will include five chapters of my book.

I approached online sites Untapped Cities and Atlas Obscura and they are also planning on reproducing some chapters for their content. Reedy allows this as long as the book is mentioned.

Nancy Brown, who I’ve known since I began writing travel articles, reviewed my book on her site What a Trip.

Whenever I received some publicity, I made sure to mention that on social media.

Reedy sent the book to Chris McGinnis, SF Travel Skills, who wrote an article about the book for San Francisco Chronicle that was picked up by a Houston paper.

Leah Garchick also wrote a nice review in her column.

California magazine, the UC Berkeley alumni publication, interviewed me about the book after I contacted the editor.

Ed Walsh suggested I contact producers at KGO and my interview with Dan Ashley was by far the biggest jump in sales according to my author’s page on Amazon.

Mark Thompson is an old friend from KRON-TV and my interview with him on KGO radio went so well he wants me to be a regular guest.

Through Molly Blaisdell I met John Hamilton and he interviewed me for On the Go with KGO.

BATW member Tom Wilmer interviewed me for his NPR program.

Ironically the stations I worked for, KRON TV and KCBS radio, did not interview me yet but I’m still working on them.

In conclusion, before you start writing your book create a marketing plan and don’t be shy about using your contacts or cold calling. Every organization needs speakers and the media needs to fill time and space…you just need to convince them your book is the right fit for their audience.