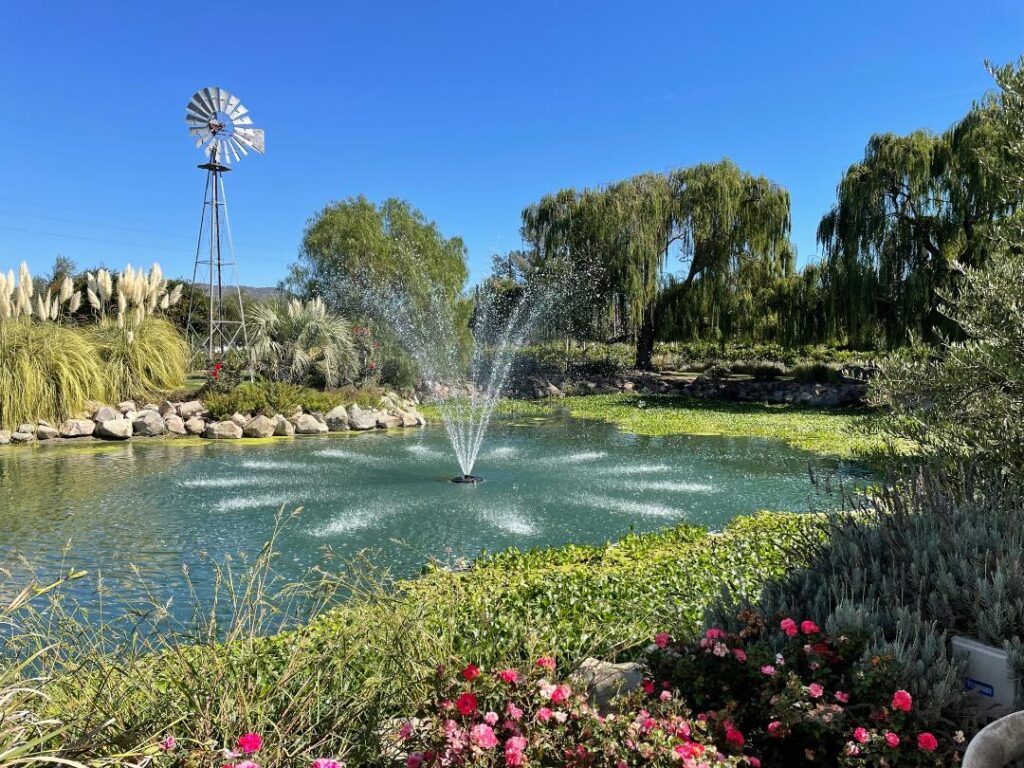 By MJ Pramik (photos by Ginny Prior)

Vodka from grapes? Why, yes—white grapes, of course. Using French Colombard grapes as the base, Hanson of Sonoma Distillery aims to craft “clean” vodkas that taste fresh and bright with a smooth mouthfeel. The vodka and infusions are certified organic, gluten-free, and non-GMO, winning a coveted Alice Waters’ Good Food Award in 2015.

On a gorgeous sunny day in late September, Bay Area Travel Writers (BATW) were fêted with an outdoor luncheon, distillery tour, and flight tasting by the energetic Hanson family themselves at their eponymous distillery. 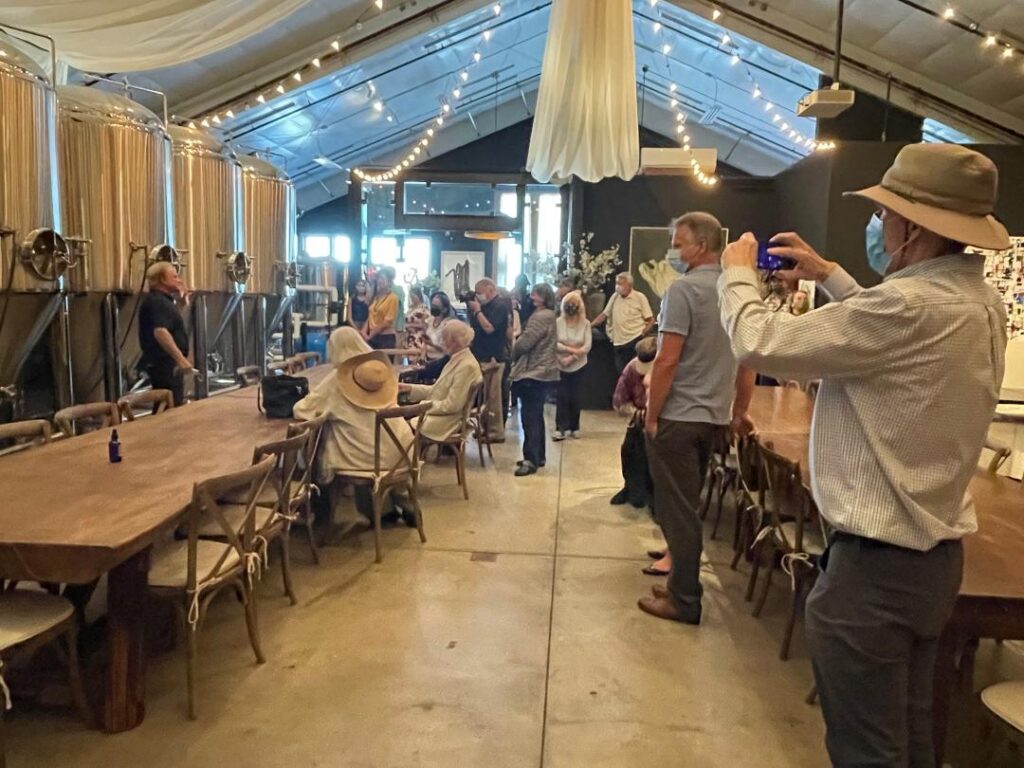 Scott Hanson, an energetic 70, jokingly praised his four millennial children for nudging their parents into the organic vodka business eight years ago, which was sparked by the passion of sons Chris and Brandon to produce unique artisan spirits.

“They came to my wife Judy and me asking us to support the endeavor. I said, ‘Absolutely not! I know nothing about alcohol, there’s no way I can help you.’”

But that didn’t stop the brothers. After repeatedly pitching the idea with no success, siblings Darren and Alanna came on board and with relentless persuasion turned making organic vodka into an outright family affair.

“To make vodka from grapes, first you have to make wine. Mastering two crafts is a heck of a feat, so we turned to our neighbors and mentors, Sonoma’s Ceja Vineyards, to guide us through the wine process. We would not be here without their expertise, generosity, and willingness to jump on board.” says Scott.

Over two years, the Hansons experimented with different grape blends and filtering approaches developing 155 batches. Down to the final three batches, they contacted the godfather of mixology, Tony Abou Ganim of Las Vegas, and sent him the blends. Impressed, Abou Ganim arranged an industry tasting panel that determined Batch 123 was the one. Batch 123 was the Hanson’s’ favorite as well, and in 2014, this unmarked, unlabeled blend won Best in Show at the Sip Awards, a 20-country international competition.

“We believe in taking risks, and fortunately this one paid off. The organic grapes produced a vodka that tasted better than any we’d had before, and suddenly we felt we’d found our place in the craft spirits market.” Says Scott. 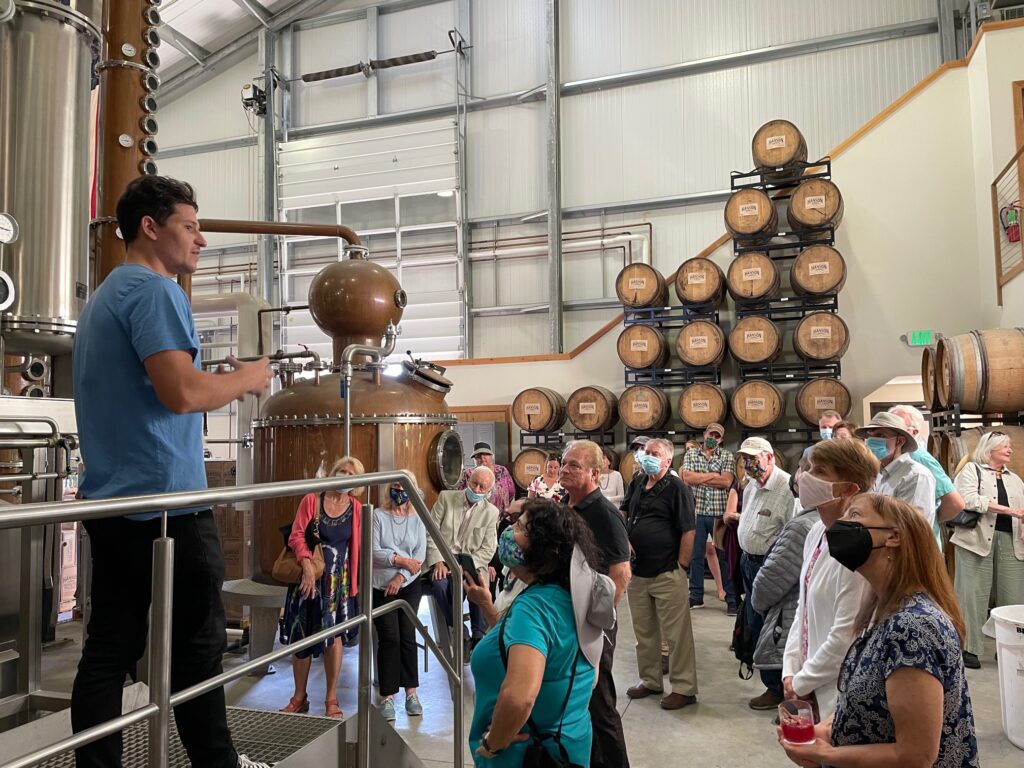 Through the winemaking area and distillery, Chris described their distillation process: “We take all the alcohol out of the wine in the first six-hour distillation to keep some grape flavors. The second distillation, which takes 24 hours, brings the liquid through a 50-window brown metal column still custom-built for us in Baden, Germany, and then into a condenser. The distilled product is 192 proof and clean: 80 to 85% alcohol.” The distillations remove “congeners,” byproducts of fermentation such as acetone, butanol and propanol, the culprits causing headaches and hangovers.

According to Scott, it’s four times more expensive to make vodka from grapes than corn, grain, or potatoes, but they’ve always chosen to default on the side of quality rather than cut corners. No sulfites are added, each bottle is individually numbered, and ALL ingredients are printed on the label (unique for the spirits market).

Hanson’s designed their own labels resembling a prescription bottle from the past. Hanson of Sonoma’s Original Organic Vodka and infusions retail at $30 a bottle at outlets such as Safeway and Whole Foods.

After the distillery tour, BATW members were treated to a flight tasting of the Original Organic vodka and four infusions (cucumber, Meyer’s lemon, mandarin, and habaneras).  All were delightful! As was the entire Hanson family.

Walk-ins are welcome for tastings, but tours of the Distillery must be booked by appointment. Tasting & Tour experiences range from $15-$35 and bottles may be purchased for $30 per.

Tasting flights include the original organic vodka plus 4 infusions (cucumber, Meyer’s lemon, mandarin, and habanera).  Tasting flights can be partnered with a cheese/olives/Marcona almonds/charceuterie board served with artisanal crackers.  They also have a chef who whips out three types of wood-fired pizza.  Hog Island oysters are available.  They’ve added Hanson Caviar (always the pioneering spirit in this family) sourced from Regiis Ova by Thomas Keller.  They sport a juice shop and serve non-alcoholic beverages such as healthful claims sparkling elderberry tonic and sparklings: peach ginger, grapefruit, elderflower tonic for the younger crowd.