Member Laurie McAndish King’s most recent book, Your Crocodile has Arrived: More True Stories from a Curious Traveler, has been named a finalist in the American Book Fest 2019 Best Book Awards. The Best Book Awards brought in over 2,000 entries in 2019—one of its biggest years since the program kicked off in 2004. 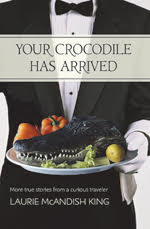 “Your Crocodile Has Arrived” – by Laurie McAndish King

Laurie also reports that she’s been experimenting with Amazon Ads for the book, and is currently selling about one book a day using this method.