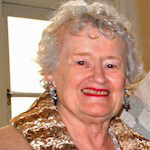 by Suzie Rodriguez
Patricia Lee was honored with the Rebecca Bruns Award in 2006, not only for her achievements as a travel writer but also spearheading the evolution of Bay Area Travel Writers. She was a founding member of BATW and the organization’s first and longest-serving President (1984-2000).
Patricia’s journey to writing was long and circuitous. She was born in San Francisco at St. Mary’s Hospital, and has lived here all her life. She attended local schools, and after graduating from high school at the age of 16, she started college at San Francisco State.
Right around that time Pearl Harbor was attacked, and life changed completely—especially for young and single women. With San Francisco as a major military transit point, young servicemen on their way to the Pacific were everywhere. Patricia, like many of her friends, volunteered as a hostess at a USO-type center, where soldiers and sailors came to dance and talk with girls, enjoy free food, and relax.
In 1942 she met a handsome Navy tail gunner from Vermont named Chuck. They liked each other, but soon he headed off to war. “That was okay with me,” Patricia said. “I was too young to get serious.”
They kept in touch, though, and when Chuck returned a year or so later they eloped. “We had known each other only two weeks over a two-year period,” Patricia said. “But it worked.” Their wartime romance was later written about by TV personality Larry King in a book entitled “Love Stories of World War II.”
After the war the young couple settled down in San Francisco and had two children, a boy and a girl. Chuck joined the San Francisco Fire Department, eventually becoming a Battalion Chief; he also taught Fire Science at City College.
When both children were in school, Patricia—who had dropped out of college—decided it was time to earn her degree so she could fulfill a dream she had of teaching. Money was tight, so she did everything she could to graduate quickly. “I took 3.5 years of classes in 2.5 years,” she said. “I grabbed every class I could.”
She began teaching “sometime in the 1950s. I taught 2nd, 3rd, and 4th grades throughout my 25 years—4th grade was my favorite.”
Patricia and Chuck traveled around the world throughout their marriage, and when Patricia took early retirement from teaching in 1982, she decided to put her time into two arenas that had become her passion: travel and writing. She took a one-day class in travel writing, after which she began meeting informally once a month with some of the people she’d met in the class to read and critique each other’s writing.
From those meetings, BATW was born.
“We met once a month at different homes,” Patricia wrote in her informal memoir, Bay Area Travel Writers History, 1982-2000. Gradually, by word-of-mouth only, our group grew. Then we needed a person to conduct the meetings and a treasurer to collect dues. Everything was done by volunteers. When the chairperson moved to Oregon, I agreed to do the job for a short time, never dreaming I would spend years in the position. When we outgrew the home meetings, Monica Conrady arranged for us to meet monthly at Fort Mason International Youth Hostel in San Francisco.”
Asked what she is proudest of from the years of her presidency, Patricia pointed to “all of the members and people we met, the wonderful times we had. Talking about travel, writing stories. It was all very vital, it was fantastic.”
She feels that travel is a wonderful teacher, and urges young people not to delay learning its lessons. “Just go!” she said. “Don’t put it off. We did it all the time, and my advice to younger people is to do it while you can.”