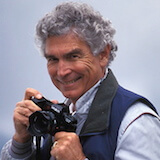 This year’s BATW Rebecca Bruns Memorial Award went to Morton Beebe. Morton is an internationally acclaimed photographer and book publisher, a long-time friend of many of us, a continuing supporter of BATW and a former BATW Board member. This award honors his achievements and thanks him for all he has contributed to BATW.

Carol Canter, who was a close friend of Rebecca, described the history of this award. The biennial honor – consisting of a plaque and cash award – is given to a BATW member who embodies the spirit of Rebecca Bruns, one of the organization’s founding members and a gifted writer, who died in 1994 at the age of 44.

“Rebecca Bruns, one of our shining stars, had her trajectory cut tragically short by illness. That she remains a muse to many of us is a testament to both her brilliance and her generosity of spirit,” Carol explained. Rebecca’s 95-year-old mother donated the funds for the award. Previous Rebecca Bruns Award recipients are Christopher Baker (2005), Patricia Lee (2006), Bruce Whipperman (2008), Lee Foster( 2010) and Georgia Hesse (2012).

Diane LeBow, Event Coordinator and BATW President emerita, presented this year’s award to Morton. A third-generation San Franciscan, he graduated from UC Berkeley and—through some interesting twists of fate—ended up as a Public Information Officer in Antarctica during “Operation Deep Freeze” in 1957-58. His adventures there, exploring the continent and eventually reaching the South Pole, produced several photo essays that were widely published.

Morton has covered the world on advertising assignments for his corporate clients, including Minolta, Nikon, Bank of America, Chevron and American Airlines. During the next two decades, he worked as a photographer and film producer, based in San Francisco, working on such films as The Graduate and Petulia. Mort was also a pioneer in the stock photography business, helping to establish and successfully grow The Image Bank, the first modern stock agency. An interesting note is that Mort is a friend of Woody Allen.

As a photographer/author, Morton Beebe has explored the world. His distinctive, beautiful work has been exhibited in numerous collections and published in a variety of magazines, including National Geographic, Geo, Life, Smithsonian, Travel and Leisure, Paris Match and Stern.

He has published several successful books, including Operation Deep Freeze, Antarctica; the highly acclaimed San Francisco: City by the Bay,which was first published in 1985 and has sold out five printings (now in a third edition); and most recently, his enthusiastically received The Golden Gate: San Francisco’s Celebrated Bridge.

Morton has been a longtime member and Board member of BATW, The Explorers Club and American Society of Media Photographers. His work has been widely exhibited from New York City to California. Morton continues to work from San Francisco, where he lives with his wife, Danielle Chavanon Beebe. Current projects include editorial and advertising assignments, a large stock archive represented by Corbis, and an ongoing underwater video project with the Deep Flight Aviator submersible.

Mort has friends and professional colleagues around the world. He has generously arranged many BATW programs, including the America’s Cup, Exploratorium and many more. A strong supporter of BATW, Morton has hosted many meetings at his Russian Hill home’s conference room.

Congratulations from all of us for this well-deserved award.