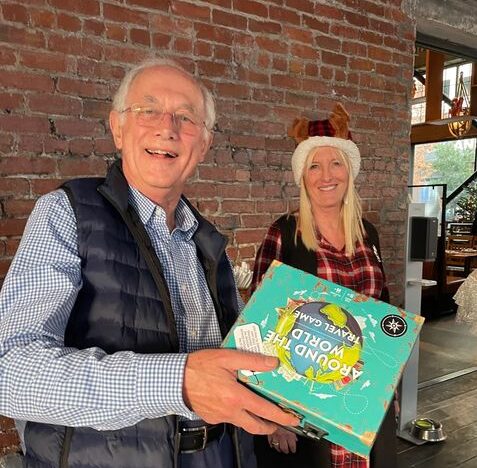 For its annual holiday party, the Bay Area Travel Writers swarmed into Calavera, an uptown Oakland restaurant in the hipster Hive development at 2337 Broadway. Calavera anchors the Hive, which mixes dining spots and trendy shops with a brewery to create a buzz during the week and on First Fridays. Oaxacan-inspired specialties make up the menu of the Mexican kitchen and agave bar.

Travel writers who parked in Calavera’s City Lift lot passed through the People’s Barber & Shop lounge, as well as a neon-lit Humphry Slocombe ice cream stand and an in-ground chess board. Inside the patio, pitchers of margaritas and heaters kept everyone warm on a brisk Saturday afternoon. Organized by Renée Roberts Marketing & Public Relations and sponsored by Visit Oakland and CEO Peter Gamez, the party launched quickly. Gamez described the Hive and Calavera as “hot spots…that are great examples of the treasures found in Oakland.”

Calavara’s owners, Christopher and Jan Pastena, who also own the popular Chop Bar in Oakland, shed some light on the name behind their restaurant. Calavera means skull and often refers to the sugar-spun skulls prevalent in Latin countries. About the interior design, Pastena said, “we wanted to try to make it feel like you were eating at somebody’s home.” The small plates are easy to share family style.

BATW members wasted no time feasting on a sumptuous spread created by Chef Omar Huerta of Mexico City. Food was generously arranged on platters and circulated by servers. Talk centered on recent plane trips and the latest Covid-19 rules, as well as on which foods were gluten-free.

Inside the restaurant, towering ceilings provide plenty of space for the mescal and tequila collection, as well as Oaxacan folk art. “Most of the artwork was brought back from my trips,” Pastena said. With the lofty backdrop, the result is sophisticated and stylish. At the large bar, an array of tequilas and mescals are on display, Mixed drinks, wine and lagers are also available.

After most folks had tasted the delicacies, white elephant holiday gift-giving began. Most members brought a present or gently used item with a travel theme worth $20 at most. From member-authored books like Diane Le Bow’s memoir, “Dancing on the Wine-Dark Sea,” to exotic-looking scarves and handbags, the writers exchanged gifts curated from around the world. There were oohs and ahs and even a few discreet ‘swaps’ as the evening ended with merriment and laughter.