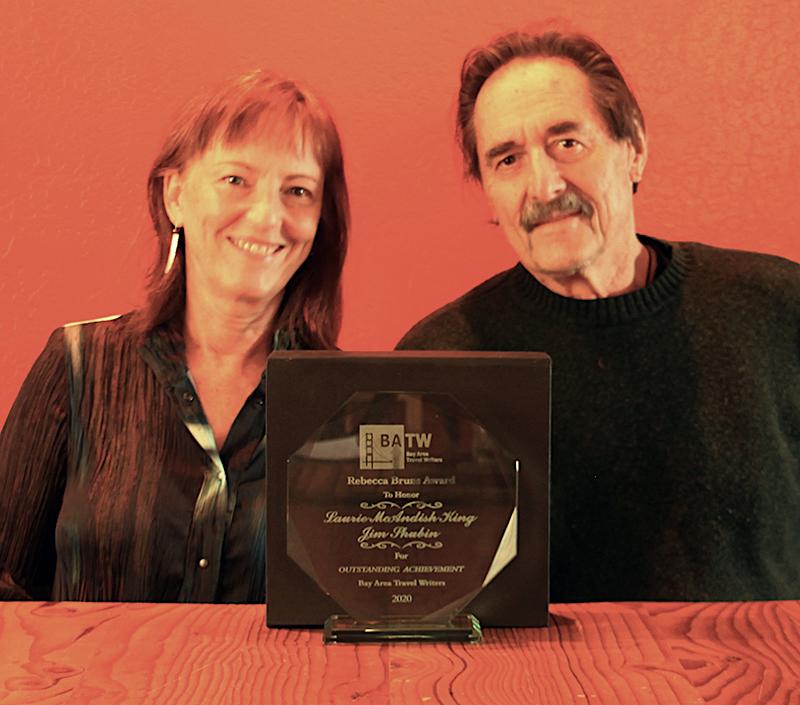 It would take a hefty Shubin/King-produced book to list everything Laurie and Jim have done for BATW over the years, both individually and as a team. For starters, consider BATW’s impressive list of publications, which probably wouldn’t exist without Jim’s skills as a book publisher/designer and Laurie’s expertise as a professional editor. Four large format 4-color books and two black-and-white anthologies now bear BATW’s logo (the “postage stamp” logo on the books is a Shubin design):

Another contribution to BATW is their productive Board service. Laurie took on roles that included Treasurer, Vice President and Co-President (with me). One of her more onerous jobs was to oversee the transition from keeping manual membership/payment records to automating processes via online membership organization Memberclicks. Both on and off the Board, Jim took on many design tasks and volunteered to help wherever needed.

While making these and other contributions to BATW, Jim and Laurie have continued to move forward with their own careers.

Born and raised in Iowa, Laurie arrived in San Francisco a year out of college. She wasn’t sure what she wanted to do career-wise, but when she started working at an advertising agency, something clicked and her career took off. After about a decade she went out on her own, staying in advertising for another twenty years or so until, around the time she joined BATW in 2004, she decided to take a chance, make a change, and try her hand at travel writing.

That was definitely the right hand to play. Laurie has since published two books of travel essays — Lost, Kidnapped, Eaten Alive! and Your Crocodile has Arrived — and is working on a third. She’s been the recipient of a Lowell Thomas gold award from the Society of American Travel Writers, co-authored a mobile app about the San Francisco Waterfront (another collaboration with me), won first place in Smithsonian magazine’s annual photography contest, and on and on.

Jim hails from Los Angeles, and from an early age was interested in art and design. After college he lived in San Luis Obispo for a decade, working at Cal Poly in both the instructional media and public relations departments. He also taught graphic design, printmaking, and photography at Cuesta College, was a part-time sea urchin diver out of Santa Barbara, and became renowned among friends for his delicious crepes.

Eventually Jim landed in San Francisco, working as an art director and creative director for Ogilvy & Mather, Grey Advertising and Saatchi & Saatchi. He gradually transitioned to running his own design studio with an emphasis on food clients, including the California Milk Advisory Board, Franzia and Mondavi wineries, Star Olive Oil, Del Monte and many others. And then came the move to publishing and producing books for organizations and individual authors, including many BATW members.

Jim and Laurie often collaborate on projects such as their photo-laden 4-color book series, “Destination Insights,” which evolved from their travels. They each contribute all photos for the books, Laurie writes the articles and manages the edit process, Jim pulls off his production magic—et voila! A beautiful and informative book about Bali, or Costa Rica, or North Africa, or half a dozen other wanna-go destinations. (You can download any of these as free PDFs by visiting MagCloud.com and searching for Destination Insights.)

Judith Horstman asked me to be personal, so I’ll add a few insights as a good friend and  occasional collaborator to both Laurie and Jim. I’m happy to say that the Shubin/King work ethic hasn’t turned them into a pair of grinds. They’re both fun, talented in lots of ways, always relaxed, and care deeply about their friends. Laurie is an enthusiastic gardener and loves to snuggle into her comfy reading chair with a book. She has a scholarly side—she’s deeply interested in science, can solve complex mathematical equations in her head, and not long ago she taxidermied a bat—but I laugh more with her than anyone I know. Jim is an always-evolving artist (painting, collage and more), a great cook, and somewhat of a raconteur—especially when he’s pouring Jameson’s. For many years Jim plied bay waters in his trim, now-departed sailboat. He once mentioned that, no matter how busy he might have been, “I always had time to take my boat for a sail.”

When it comes to BATW, neither Jim nor Laurie think in terms of how much they’ve done for the organization. Rather, they appreciate how much BATW has done for them.

“I’m so grateful to BATW and all the people in it,” said Laurie. “I’m truly grateful for the experience I had while being on the Board. All of it helped me grow as a person and helped launch my travel writing career.”

Jim agrees. “One thing I’ve gotten out of BATW is having friendships with people who are writers and photographers,” he said. “People who know how to have fun, who experience fun travels. The people in this organization give me the impetus I need to promote them in the way that I can—with our books.”

The award includes a plaque and a $200 check.

SIDEBAR: The biennial Rebecca Bruns Memorial Award, first bestowed in 2005, is awarded to members who embody the talented travel writing and generous collegial spirit of Rebecca Bruns. One of BATW’s founding members, Rebecca died at the age of 44.