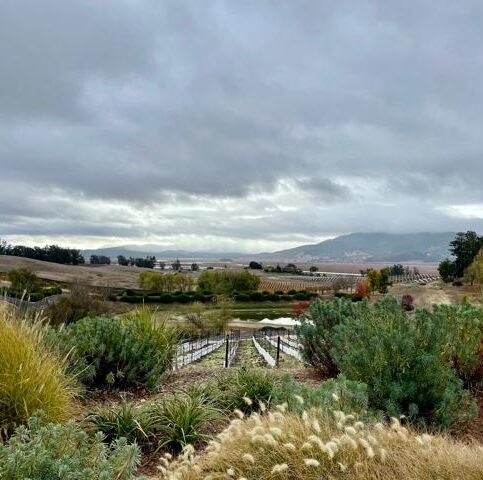 Silver Penny Ranch, deep in the heart of the Petaluma Gap, was the destination for our November BATW gathering, organized by Rosie Cohan. An expert panel of varied expertise on Eco-tourism/Argo-tourism, informed and regaled our BATW members.  Moderator, Sue Conley, cultivator of Silver Penny Farm, took us through her involvement and deep roots in the organic history from the Point Reyes environmental movement to the sustainable land movement to founding of Point Blue Conservation Science,
a scientific nonprofit with a specific direction in climate change and develop nature-based solution that are resilient.  The land and those who farm, grow, produce, harvest, and thrive hold a sacred respect, a silent pact of sorts with the soil, water, and land; and Silver Penny Ranch is no exception.

The second panel guest, Gibson Thomas, publisher and editor-in-chief of Edible Marin & Wine Country, loves to bring people together and was the force behind carving the path for Marin County Slow Food movement. Delving into a bit of history, Gibson recounted the craft and determination of the rebels with a cause- small farmers, who together figured the best way to ward off 100 to 200 housing developments in the late 60s in Point Reyes was to expand their 2-acre farms to 60-acre parcels to farm, thus blocking developers dream of a housing sprawl, and incentivizing farming. By 1990, Marin County was the first all organic county in the country, setting a trend for other counties to follow.

Gibson says she focuses her publication on the iconoclast as well as simple folks who define, create the Sonoma Napa region.

The only gentleman on the panel, or some might say cowboy, was Loren Poncia, born and raised in Tomales, a 5th generation rancher, carbon farmer and overseer of the ranching operation Stemple Creek. His pride is raising grass-fed beef, and he kept the writers laughing with his easy-going manner and full-circle story.  After college, Loren admitted that he had gone to the dark side. He went to work for Monsanto; with the grace of common sense and a desire to return to the land, in time he came home and took over the family farm.

“My dad was older, and the land was in tatters; the cows were given bovine growth hormone, and the first few years of ranching were hand to mouth, as had been the farming tradition of so many ranchers,” noted Lauren.   When Lauren noticed the cows he sold to Harris Ranch were getting sick, he made a 360-degree spin to organic and his dance with nature and nutrient rich soil commenced.  We all had a good laugh when he amused us with his venture to the farmer’s market with his grass-fed beef in tow nine years ago.

“Some chef from a place called Zuni restaurant showed to buy our beef, and then not long after, Chez Panisse shows up to order our beef, and, well, word got out about Stemple Creek organic meat.

The last speaker, Libby Porzig, the Director of Point Blue’s Working Lands, informed us of the role science plays in Marin and beyond, noting the importance of land stewardship for sustainability and the understanding of how our food is produced.  Questions of tillage and soil health to the single most important management cycle, water, are just few of the topics Libby covered. Of all the statistics, the most surprising to me is that half of the land in California is privately held.

And with that, we all moved into the patio and house for lunch, the yummy lunch supplied by some of the panel and local farmers. After chat and a self-guided tour of Silver Penny Farms, we got into our cars and drove down the road to Keller Estate for dessert and a tour of the vines and olives cultivation.

But it wasn’t grapes and olives we all noticed first, it was two large museum garages housing a grand variety of classic cars. Of course, we oohed, awed, and swooned, some of us old enough to recall when these beauties ruled the roads, and some from our grandad’s time.

Owner, Arturo Keller worked for many years in his native Mexico City as an auto supplier to be around his passion-vintage cars. In the 70s his passion took him to San Francisco where he and his wife, Deborah, took to the winding roads north of San Francisco where he spotted the land we were standing on, Keller Estate, in the heart of the Petaluma Gap, an area too cool thought to grow grapes, but turned out to be the perfect climate for Chardonnay.  In 1998, Arturo’s daughter, Ana joined the venture to build the winery to the remarkable and beautiful estate it is today. We toured the grounds with Ana and walked through the process of production before being seated amidst the cars to sample some of Keller’s wines.

Saying goodbye, atop the Petaluma Gap, the mist falling around us, was the perfect ending to informative and fun-filled Saturday BATW meeting.