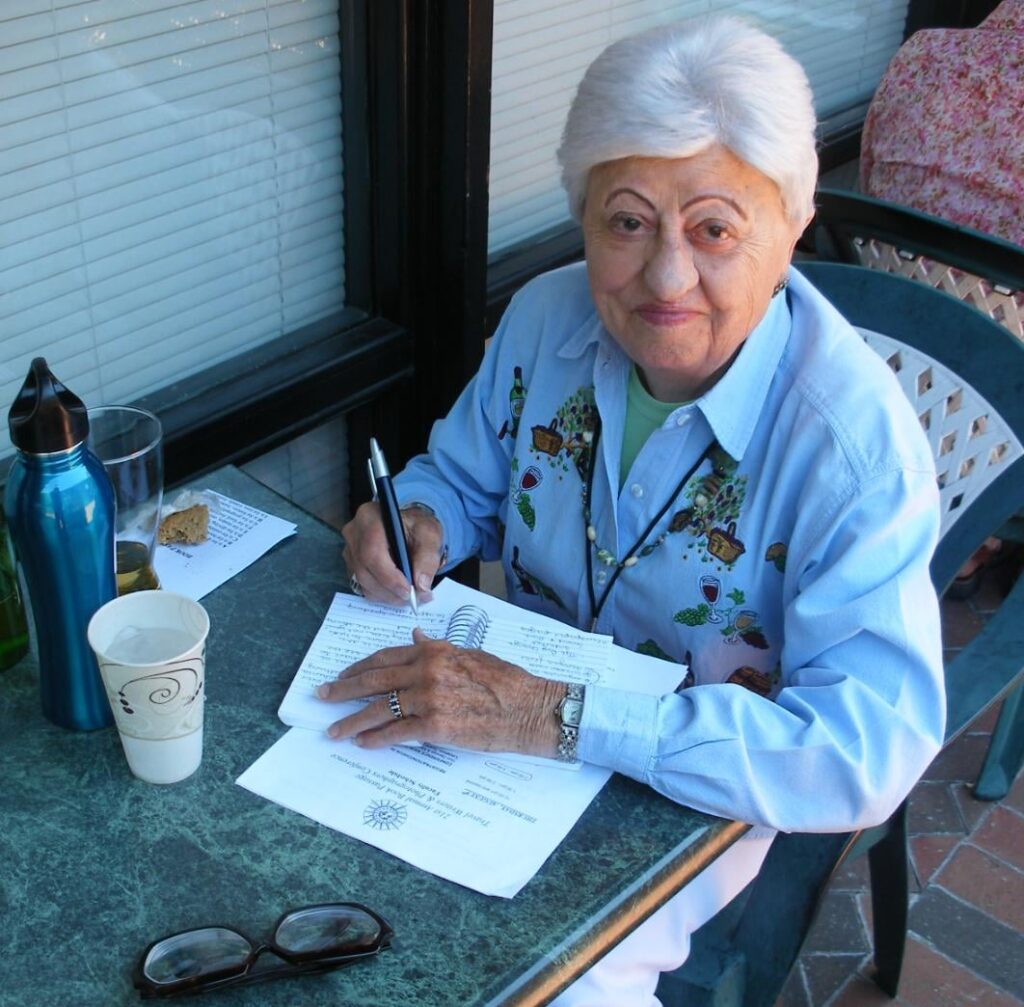 Legendary travel writer and editor Georgia Hesse passed away on February 4, 2022, at the age of 88.

Elegant and erudite, warm, witty and irreverent, a true original, Georgia impacted each of us who had the privilege of knowing her, as we see from the tributes pouring in. She made us all feel special and important, co-conspirators in her remarkable, wild, magnificent and sometimes subversive adventures, as she regaled us with stories — from riding the range as a child in her native Wyoming to being the eighth woman in history to have been at the North Pole.

In Georgia’s own words:

It was my job, of course, to try to value our multiple worlds equally, since I was writing for a public of all persuasions and who is to tell Everyman what is divine and what is only correct? I recognize the attractions of Mother England, certainly, but personally I revel in the witchiness of Wales, say, or the sprite-spirits of Scotland. And they are but pale shadows of those who pad through jungles by night in deepest Guatemala.

We are writing to you with profoundly sad news: The amazing, inspiring, beloved Georgia Hesse passed away last night.

As you all know, Georgia was a legendary travel writer and editor. She was a true trailblazer who founded the San Francisco Examiner Travel Section and quickly made it one of the premier sections in the country. As Travel Editor, she adventured around the world, creating stories that enthralled and transported hundreds of thousands of readers.

An extraordinary writer and editor, she was also an extraordinary human being, with an infectious sense of fun and wonder, a heart as big as the prairie on which she was raised, and a mind as wide as the world she grew up to explore and embrace.

She was a founding faculty member for the Book Passage Travel Writers and Photographers Conference, and for decades she delivered the conference’s opening lecture on travel writing, in addition to teaching workshops, speaking on panels, and generally illuminating the piazza with her graciousness, generosity, wisdom, and wit.

We cannot adequately express how much her larger-than-life presence meant to us and our entire community. She was a mentor and inspiration to us all.

We are still trying to comprehend the reality of her passing, but as we do so, we revel in memories of the passion and delight she brought to everything she did, to everything we did together.

We will have a grand celebration of her life and legacy when we gather in Corte Madera in August.

For now, in this time of sadness, let us recollect with gratitude the countless moments of fun, wonder, learning, and awe we shared with Georgia, and let us hug each other in celebration of Georgia’s extraordinary, world-hugging life.

Some of many heartfelt replies which followed:

Dear Don and All:  Oh what sad news indeed. I agree with all the accolades and offer more. At nearly every travel writer function I ever attended, it was Georgia who, after dessert, stood and, with grace and often good humor, thanked our hosts. We proudly and lovingly called her the doyenne of the Bay Area travel writing tribe.

Did you know that she was a member of the “4 H’s.” That was an exclusive club of editors of major city travel sections: Georgia Hesse (SF Examiner), Kermit Buzz (Buss, I believe is the correct spelling) Holt (Chicago Tribune), Jerry Hulse (LA Times), and Bruce Hamby (Denver Post). I feel fortunate and honored to have met each of them at one time or another. But Georgia was the queen bee.

Thanks for letting us know. There’s a new star in the heavens tonight. (Jim Gebbie)

David and I (and Molly Blaisdell) went to have tea with her in connection with the prize she ultimately agreed to judge, for the Bay Area Travel Writers, a couple of years ago, at that fancy seniors’ home.  She was no longer living there, but seemed to have seigneurial rights to return whenever she wished. She had on a fabulous belt, and bracelet, and had come to play that day.

She switched us over to wine, and talked about dressing one of the Hearsts down in an elevator, about riding a horse to and from school, about what good travel journalism meant (and didn’t mean), about her trip to the North Pole and the Tran-Siberian Railway across Russia. I’d asked to see some more of her work, and afterwards, in a hand-addressed packet came some marvelous stories, including the one about the North Pole. It’s reprinted (with two others) in that anthology on which I was working. From start to finish it’s great. But this lead, to a story on Macau:

When I was the Dragon Lady, Queen of the South China Sea, I was tall and willowy, dressed all in white and wore a dagger in my garter. I operated out of an opium den in Macau, the wickedest port in the world.

That was when I was 12 years old, not incidentally. Macau was out of Rudyard Kipling and Noel Coward and Robert Louis Stevenson by “Terry and the Pirates,” the seemingly eternal Milton Caniff cartoon strip. I didn’t know what opium was, but it sounded swell. So did the name Macau: mysterious, dissolute, delightful.

It seems that once Macau may have been as villainous as I wanted it to be. Dutch author Hendrick de Leeuw in his “Cities of Sin” (1934) painted it in the purplest of proses: Macau “harbors in its hidden places the riffraff of the world, the drunken shipmasters, the flotsam of the sea, the derelicts, and more beautiful, savage women than any port in the world. It is a hell.” Heaven.

She engaged with the actual Macau in the rest of the story, with plenty of research about its history, and informed cultural curiosity. But I don’t think many would stop reading after this lead.

What a witty and warm person, as interested in David (not in the field) as Molly and me (both in it). Just such good company. What is the deadline for the award judgment, she said, with a pen poised over her diary.“I always meet my deadlines. I just have to know what they are!” (Alec Scott)

Jim and I are so grateful to be inspired by Georgia; thank you for sharing so many lovely memories of her. We toasted Georgia last night with a wee dram. It felt like the end of an era, but we’re going to help ensure that her spirit lives on. . . (Laurie McAndish King)

Dear Georgia . . . I first met Georgia in San Francisco when I was 19 years old in 1973. Her grand office in the San Francisco Chronicle building was my last stop on my Moveable Feast sandwich delivery route. Five days a week I would parade up to her wood-paneled corner office in my long flower-print skirt and lace blouse peddling organic salads, fruit cups, brownies, and turkey sandwiches. She would graciously invite me in and after selecting her lunch from my basket of goodies, she would ask about my travels. I had been vagabonding in Europe and the Middle East for 18 months and she wanted to know details and encouraged antidotes about my adventures. When she found out I was saving money for my next grand tour to South America and parts unknown she said emphatically, “You MUST write down your adventures!”.

Yes, Georgia, you were the catalyst. And the travel section in  the San Francisco Chronicle was the first place my work was published—merci Don George!

Bless those that have inspired and encouraged our creative foray transforming worldly experiences into entrancing stories. (Lisa Alpine)

Saturday was a sad day. I lay awake last night recounting good times and the stories told by my old friend Georgia Hesse, who passed away Friday night. She, more than anyone, was the catalyst for a new direction in my life.

I had bagged a career in TV news in favor of teaching at San Francisco State at about the same time Georgia resigned as the San Francisco Sunday Examiner’s long time travel editor. I was bitten by the travel bug and wanted to apply my skills to something more rewarding than reporting car chases. We met, became friends and sometimes collaborators. I decided to give travel writing a try. I wrote a story about Brazil, which she agreed to edit. She returned it to me a few weeks later, with edits, in an Air France airsickness bag postmarked Paris. I rewrote it and it became the lead story ‌LA Times travel section.

We spent long hours laughing and making up headlines, sometimes featuring insufferable puns. I outfitted Georgia with a tape recorder. She stuck a microphone down a hole in the ground in France and recorded the source of the Seine. She recorded her trip to the arctic, toasting with scotch and snowdas at the north pole.

Read her brilliant, funny story and listen to the audio of both here:

Georgia introduced me to PATA, the Pacific Asia Travel Association (PATA) which was considered the APEC of tourism. I started there teaching seminars and producing videos. A few years ago, more than thirty years later, I retired from its Board of Directors. I would not have met about a third of my Facebook friends had it not been for Georgia.

We traveled together, conquering Germany, Thailand, Malaysia, occasionally acting like goofy teenagers. At a luncheon in a small Bavarian town, Georgia and I and the irrepressible Nan Birmingham of Town And Country Magazine concocted a story for a couple of obnoxious travel writers who were allegedly eavesdropping on others in an effort to poach stories. It went something like this:

“Did you hear about the bellringer?”
“On Uberganger Street.
“Oh yes, a charmer, I hear, a funny little guy.”
“And his wife, six feet tall. Once a high-fashion model in New York.”
“But they were so in love. He was so short that she had to pick him up so he could reach the klanger.”
“And he became known as,” in unison, “the Uberganger Klanger Hanger.”

After Pat and I moved to Sonoma, Georgia held court in our backyard entertaining us and friends, new and old, with amazing stories of her amazing adventures.

Please add your memories, stories and accolades in the Comment section below